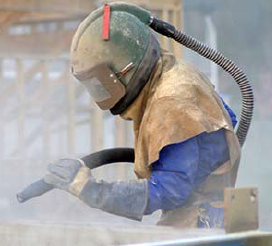 Compressed breathing air is used to supply air to workers via a breathing hood or airline in paint booths, spray booths, silica blasting, and other applications. Manitoba Workplace Safety and Health regulations require that compressed breathing air (CBA) systems be tested every 6 months to ensure that the quality of the air provided to a worker does not pose a health hazard to the worker. The air test must meet the air quality criteria laid out in the CSA Compressed Breathing Air standard (2013). A provincial workplace safety and health inspector can issue an Improvement Order to a workplace under the Workplace Safety and Health Act if testing has not been done. Testing should also be performed, every 6 months,  at the time a unit is installed and after a major overhaul of the unit.

Winnipeg Air Testing can collect a sample of the air from your breathing air system using the testing method and analysis described in the CSA-Z180 criteria. A certificate of compliance indicating that the unit meets the CSA standard is issued to be posted by the unit.

Winnipeg Air Testing also does food grade compressed air testing following the ISO 8573 Method as well as microbial testing for mould, yeast and bacteria in compressed air that comes in contact with food or food packaging.