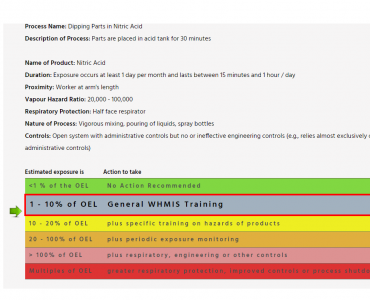 The vast majority of worker exposures are never sampled. The major impediment to more testing is the cost of collecting samples and having them analyzed at a laboratory. Provincial safety and health legislation requires employers to assess potential exposures to workers. Most exposures are not assessed because of a lack of a convenient and reliable way to estimate exposure. Most workplaces don’t have the training to perform a credible worker assessment and simply don’t know where to start.

WATSIN is an easy to use exposure calculator that was developed to estimate worker exposure. Answer 6 multiple choice questions and the exposure is predicted as a percentage of  the Occupational Exposure Level (OEL). Winnipeg Air Testing is a partner in a WCB-funded research grant based on the WATSIN exposure algorithm. WATSIN has the following applications:

1 ) As a screen to eliminate unnecessary air sampling

4) as the basis for an appeal for an Improvement Order or Stop Work Order issued by a Government Inspector.

WATSIN has been used by Winnipeg Air Testing for several years and have back-checked the WATSIN predictions against hundreds of actual sampling results.